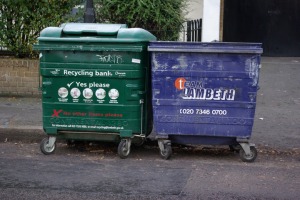 We had a public meeting with Cllr Jennifer Brathwate about waste and recycling on the estate on 1st February.  The minutes are below. Note that the chair said on 1st September “We don’t care about outcomes from February general meeting.”

Opening remarks by Cllr Brathwaite
Cllr Brathwaite made the following points:
Lambeth  Council wants to make recycling easier for people who live on estates, and actively welcomes suggestions on how to do this. The community group who comes up with the best idea will win £2,500

There  is a “Golden Ticket” scheme where residents who recycle cans get entered into a prize draw. She will send details

The council knows some people don’t like touching the communal bins. Making these pedal bins might help, but no date for implementation

In response to the discussion she also commented about bulky waste. On Lambeth run estates there are centralised points for the collection of bulky waste. She is surprised something similar does not happen on Metropolitan estates

Cllr Briathwaite will organise a meeting between the various authorities on the estate (Metropolitan, Lambeth, Pinnacle etc.) to organise who does what when as far as rubbish collection, fly-tipping is concerned.

Ideas
Residents made the following suggestions:

[UPDATE: At the July committee meeting the following was agreed: ‘At the conference Lambeth mentioned proposals for a “mini Vale Street” on the estate.  This is similar to the proposal that “We need more bins for recycling specialist items, e.g. electricals and clothing” mentioned at the February general meeting.  A proposal was made that we will not implement the decision of the February general meeting regarding specialist recycling and we will take no action for or against Lambeth Council’s plans for a “mini Vale Street”.  The chair accepted that this view was that of the majority of the voting members of the committee.’]

There was also discussion about whether to issue residents with recycling bags: either thin disposable ones or thick multi use ones. No resolution.

Problems
The following additional problems where identified by residents

Metropolitan have a policy to collect fly tipping within a week. The cost of this is borne by resident’s service charges.

There is a big problem with fly tipping in the Crescent

[Secretary’s note: A resident from Neil Wates Crescent has agreed to come to the St Martins TRA committee meetings as an observer, so we can plan how to solve these issues]

Food Waste
Cllr Brathwaite said food waste recycling may be introduced on the estates, but this is not certain.

Cllr Brathwaite said it is possible to keep food waste inside without an offensive smell.

Any Other Business
Damp is a problem in many parts of the estate. We know it’s a problem in Sheppard House and Godolphin House. A resident said it was also a problem in 45-111 Abbots Park (odds). The TRA is doing a survey on damp throughout the estate. The committee will report at the next general meeting

A resident in Nicholl Court complained footballs from the neighbouring pitch were entering the communal back garden. There need to be better measures to keep the footballs out. She and her neighbours will liaise with the Karla Powell and a representative from Pinnacle. She’ll let the TRA know if she’s happy with the response